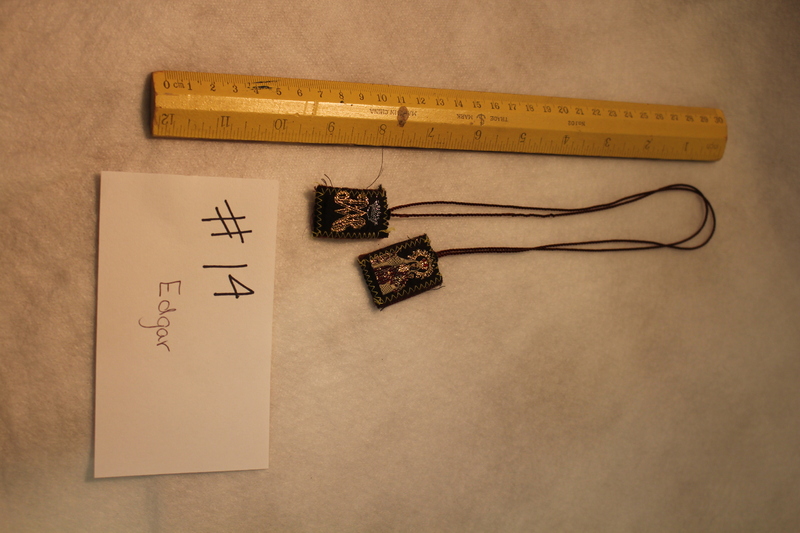 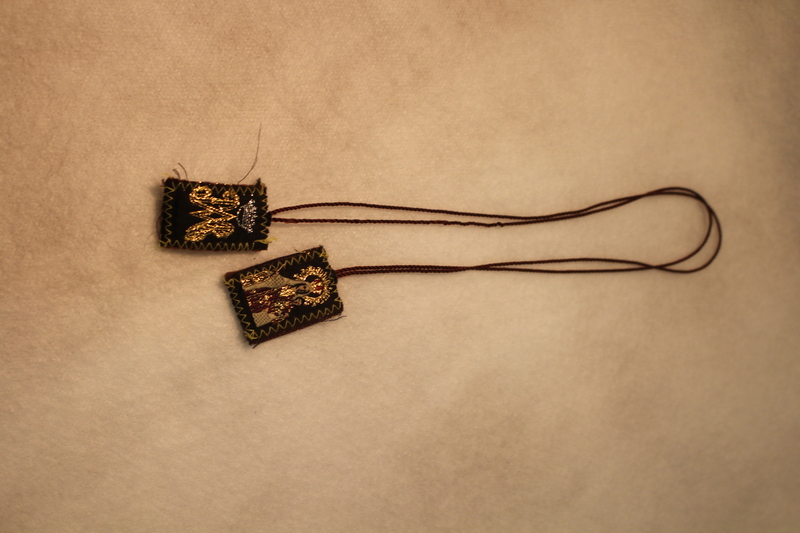 The scapular necklace, known as an escapularios in Mexico and other Latino cultures, is a religious necklace worn by devoted Catholics across the world. Similar to Edgar’s story whom this particular escapularios belongs to, these necklaces are blessed by the priest and worn as a sign of commitment to one’s religious beliefs. As Catholics believe, wearing this necklace will keep Virgin Mary and Christ with you protecting you from any and all hard times one wearing it may face. This particular escapularios has been blessed in Mexico and passed down for generations on his maternal side. The tale of the Catholic escapularios goes back ages to around the twelve century however different stories and versions can be traced depending on the style, design, and color of the particular necklace. The black escapularios is an ode to the Seven Sorrows of Mary which was created in the thirteenth century by Pope Alexander IV when he made up a confraternity to honor the Virgin Mary. To tell if someone was part of the group, black escapularios were established and worn. While wearing it, those were to devote their lives and religion to the sorrows.[1]

Despite the escapularios being a necklace for Catholics all over the world, it seems to carry much more meaning and tradition to those Mexican Catholics, especially after they immigrated to the United States. Church and religion, in general, was used as a way to help Mexican immigrants cope with the racism and blatant marginalization that plagued them in their barrios upon entering the new country. Church was one of the few ways they knew they would be able to keep Mexican culture alive in the new country. This sentiment can be traced back to this particular escapularios.

After the settlements of a few Mexicans in the United States and during the time of more immigrating, many of the Mexican Catholic Church culture started to be adapted by the American citizens. The Mexican immigrants used church as a community based activity, slowly inching this tradition into to lives of other American Catholics. The praise and glory of the statue of Our Lady of Guadalupe, whom is immensely special in Mexico, started to gain respect in the United States, particularly the south western states where a lot of the Mexican immigrants were settling.

To show both United States and their individual respect for Mexicans and their religious culture, First Lady Jackie Kennedy and President JFK traveled to Mexico in the early sixties to attend mass. While there, First Lady Jackie Kennedy could be seen after mass in an induction to the Mexican Catholic Church where she knelt in front of the prominent Mexican Catholic figure, Our Lady of Guadalupe, and was given a gold escapularios.[2] This proves just how important Catholicism is to the Mexican culture and how they were able to keep these specific traditions as they immigrated to United States, slowing altering these American Catholicism cultures.

Copyright to this resource is held by Edgar Perez and is provided here by CCSU for educational purposes only.