Connecticut Irish and World War I

A brief history of the Irish American citizens of Connecticut who took up arms and fought for America during World War I.

This exhibit will explore the history of the Red Cross in Connecticut and the role its nurses played in the organization during World War I.

Moving on Up? The Great Migration in Hartford Connecticut during the “Great War”

African Americans in World War I: Contributions, Efforts, and the Fight for Equality

A brief history of the contributions of African Americans during and after World War I: on the front lines, on the home front, coming back from the war, and fighting for equality in a country that enslaved them fifty years before.

An overview of manufacturing in Connecticut during the First World War using photos from various factories showcasing their productions.

Hartford Women in World War I

An exhibit of stories of lives of Hartford women during World War I.

The Woman's Land Army of America in World War I

The Woman’s Land Army of America (WLAA) was an organization that began as an effort to alleviate the farm labor and food shortages that the United States was facing during World War I. This organization, formed and run entirely by women, recruited and trained female volunteers to work the fields at a time when male farmhands were scarce. These women, known as farmerettes, made a significant contribution to the war effort and helped to ensure that the American nation and its men fighting in Europe were well fed.

This exhibit explores the activities of the Woman's Land Army of America in World War I.

Music As Propaganda in World War 1 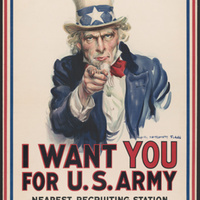