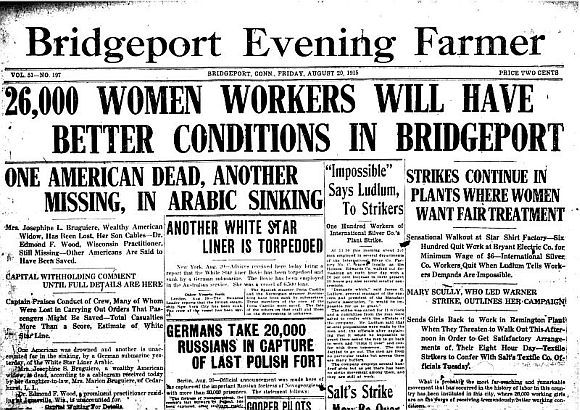 In 1915 the demand for firearms far exceeded the supply, and the demand for workers also exceeded the supply. This phenomenon, along with the rise of labor unions and womens rights advocates, helped women achieve a significant workers rights milestone with an eight hour work day in Bridgeport, Connecticut. While it was advertised to the public as being an act of kindness by the factories in Bridgeport, the fact was that the women held significant leverage over the manufacturers that were struggling to produce firearms and ammunition without increasing their workforce and meeting their needs.

The New England Historical Society chronicled this achievement, writing that  they, "used the campaign for the eight hour dayto appeal to new members. It worked. The IAM’s General Vice President Pete Conlon said, "Everyone has the fever and all you can hear is eight hours. The sidewalks, the telegraph poles and even the office steps of the factories are chalked in large letters 'WE WANT EIGHT HOURS'.'

The IAM distributed to Bridgeport workers 10,000 copies of a newspaper called The Labor Leader,carrying a verse that went:

We mean to make things over, we’re tired of toil for naught,

We haven’t enough to live on, nor even an hour for thought.

We want to feel the sunshine, we want to smell the flowers,

We know that we are worth it, and we mean to have eight hours." (New England Historical Society). 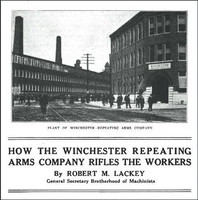 Prior to the United States entering the war, working conditions at Winchester and Remington were brought into question. Workers had complained about long hours, low pay, and exposure to dangerous conditions while Winchester executives enjoyed a period of financial growth, becoming one of the worlds largest firearm manufacturers and controlling a New Haven plant which expanded almost sixty acres.

According to some accounts, workers who threatened to unionize would often be terminated immediately. An online exhibit titled "Our Community at Winchester" evaluated this work by Robert M. Lackey, in which Lackey stated, "The Winchester Repeating Arms Company is the largest manufacturer of firearms and ammunition in the world. Its plant covers 59 acres the heart of New Haven…From 5,900 to 6,400 workers are on the payroll…Its products are shipped to every corner of the globe. Winchester goods are in great demand for sporting purposes, but wars are a very important source of revenue. Frequently, mysterious shipments are made to unknown destinations. They may be for a revolution in China, South America, or Mexico. "

In 1917 Winchester was desperate to meet the demands of their government orders. Workers wages were increased, more workers were hired, and women were given more opportunities to gain employment. Working conditions as described by Lackey improved with this success and high demand for products. 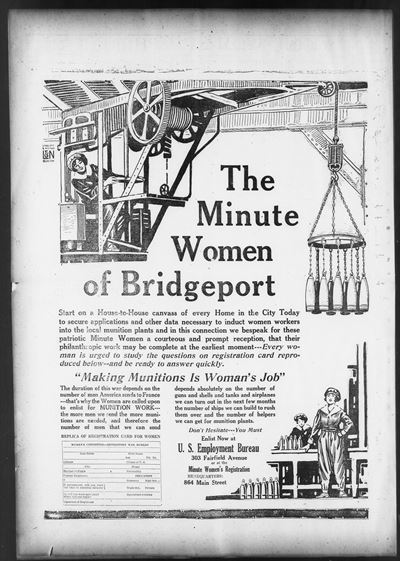 The Minute Women of Bridgeport Advertisement/Promotion

Even before the start of the war, Bridgeport was becoming a major industrial producer of ammunition. Amidst women's rights movements and labor disputes in other towns, Bridgeport strongly encouraged women to join the workforce in munitions.

In 1915 Bridgeport instituted the eight-hour work day for women, and in 1918 the Connecticut Minute Women began recruiting women to work in the Bridgeport munitions factories. The work was advertised as "womens work" and promoted women workers, explaining that men were needed to fight overseas while women were needed to fill the void in the factories. This propaganda movement work, as the Connecticut Digital Newspaper Project explains that "suddenly, the corset factories of Bridgeport were in competition for female workers with the arms plants of Remington-Union Metallic Cartridge (UMC) and other companies eager to take full advantage of the new war-time economic opportunities.  By the late summer of 1915, around 5,000 women had been hired into the UMC operation" (CT Digital Newspaper Project).

The Minute Women of Connecticut would walk door to door in Bridgeport registering women for work. An advertisement like this was sent out encouraging women to be prepared to register at a moments notice, hence the term, "minute women."