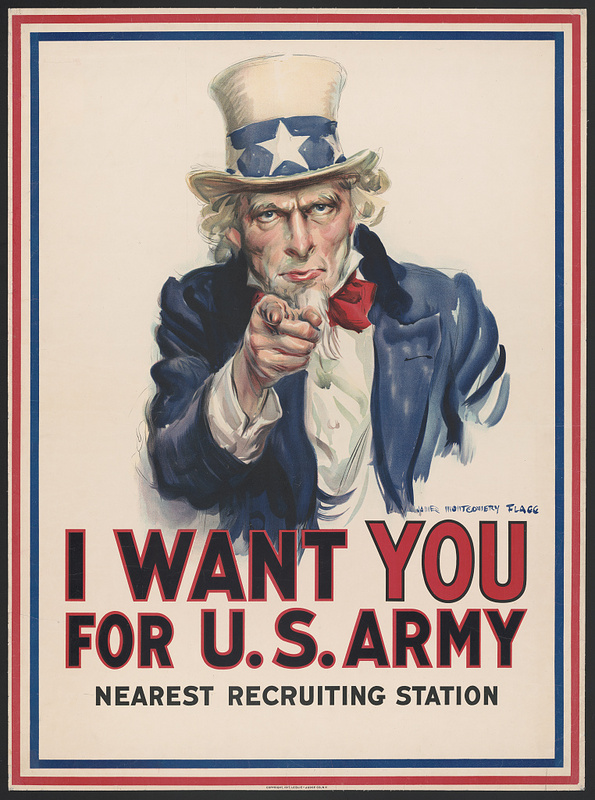 “I Want You” Poster: The “I Want You” poster was created in 1917 by James Montgomery Flagg. During this era, Flagg was one of America’s leading illustrators. At the start of U.S. involvement in World War 1, Flagg created 46 different posters, with this one being his most famous. This poster has been re-adapted for World War 2, as well as other more current wars.

By definition, propaganda is the spreading of ideas, information, or rumor for the purpose of helping or injuring an institution, a cause, or a person. (Merriam-Webster) This practice is very common in wartime, from present time Iraq and Afghanistan to as far back as the American Revolution. Nations all around the world, and in particular the United States, use these exaggerated facts or fabrications to get their own country to believe in their cause and not the other side. In the beginning organizations spread their message using letters, newspapers, and pamphlets. As the wars went on, music became the new way of quickly getting your message to the masses, followed by film, then television, and today one could include social media. While newspapers and pamphlets were still the traditional method, the way music was used in World War 1 proved that non-traditional ways of disseminating information was becoming the better option, and paved the way for the other non-traditional methods to follow.

Connecticut was very influential in this push to use music as a propaganda platform, specifically on the home front. Many Connecticut publishers were the ones to print and distribute the song booklets that contained these newly written pro-war propaganda songs. Also, in order to create hype around the idea of supporting the war effort, Connecticut cities and towns created “Liberty Choruses” to sing these songs and others at rallies and fundraisers. These choruses had such great success in Connecticut that they began popping up all over New England before exploding onto the national scene.