The Colt Armory in 1906 located in Hartford, Connecticut.

For much of the 19th and 20th century, Colt and gun making were synonymous.  After over a decade of setbacks, Samuel Colt found success with revolver production when he was working with the Whitney Company.  After amassing enough wealth Samuel Colt was able to start his own company in 1855, the Colt Patent Firearms Manufacturing Company.  Later named the Colt Manufacturing Company, Samuel Colt found early success during the Civil War.  Made famous by their first revolvers, the company prospered from war contracts in the 1860s making hundreds of thousands of pistols per year by the end of the war.  Samuel Colt would not live to see much of his company’s success as he died in 1862.  His wife Elizabeth lived until 1902 and greatly influenced the development of this gun empire.  The company was headquartered in Hartford, Connecticut where their famous armory stood.  Colt Manufacturing Company brought jobs and wealth to the state of Connecticut from its founding to the present.  During World War I the company would reach new heights of production with the Model 1911 pistol. At the time it was sold to the United States, Great Britain, Russian, Canadian, and French armies in World War I and variants of this design are still produced today.  The company would produce hundreds of thousands of guns during the war ranging from pistols to machine guns.  Colt would continue to have times of success and challenge over the years, suffering during the Great Depression and later making recognizable guns such as the M4.  This exhibit will concentrate on Colt’s production during the First World War and its impact.

William N. Hosley, Colt: The Making of an American Legend. 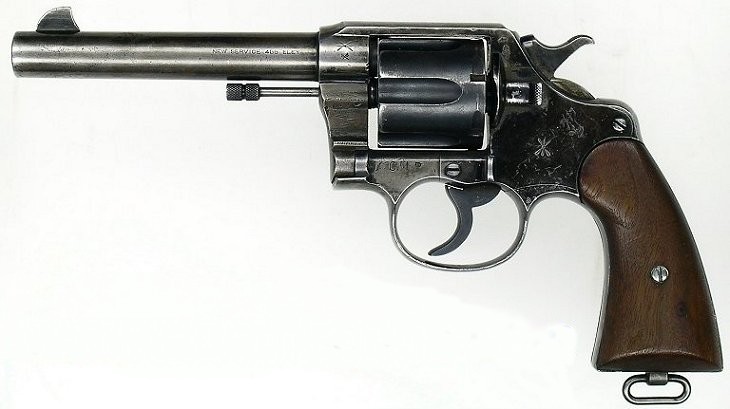 The Colt Model 1909 which saw limited use in World War 1.

Connecticut had been a center of industry since the 19th century with the cities of Hartford, Bridgeport, New Haven, New Britain, and Waterbury all having large and numerus industries.  Waterbury had the Brass industry, New Britain had hardware, and Hartford had Colt, but during the recession of 1913 economic downturn threatened manufacturing in the state.  Across the nation business activity was down 25% and many factories were producing below their normal output to save money.  Companies in Connecticut were laying off workers in the hundreds.  Factory employment in Connecticut was 169,677 at the time and 21,066 in Hartford, but this number quickly rose as World War I broke out in Europe.  Even though the United States remained neutral until 1917, the first three years of the war brought a huge number of war contracts to Colt.  These war contracts began in 1914 when Great Britain and France realized that they had drastically underestimated the scale of the conflict and could not meet the large demand for guns and ammunition.  Connecticut was ahead of the game when it came to war preparation and began a war census before the United States declared war on Germany.  As European governments looked for companies to produce war materials, the state had already begun creating lists of potential war producers.  The governor wanted a detailed list of the men and manufacturers available for the war effort in the state.  It took time for most businesses to convert over to war production which put Colt in a unique position as they were already producing guns and ammunition like the M1911.

Lozada, Carlos.  “The Economics of World War I." 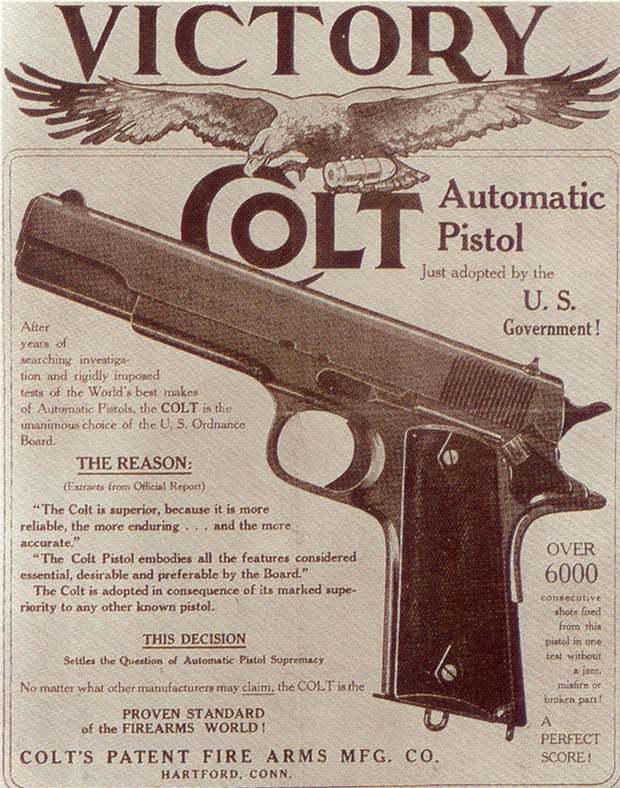 An advertisement for the Colt Model 1911 pistol.

In 1915, there was a dramatic increase in war production for Colt.  So much so that most production was either directly or indirectly war related causing Colt to expand the factory and workforce to meet this new demand.  In May of 1915 Colt received a war order from the Romanian government for 20,000 Model 1911 .45 caliber semi-automatic pistols, 40,000 magazines, and 2.4 million cartridges.  The Colt M1911 was a particularly popular gun during the war with 400 a month being purchased by Great Britain’s Ministry of Munitions.  The pistol was designed by John Browning and entered service in 1911 for use by American forces battling Filipino guerrillas.  As seen in the advertisement, the pistol bested five competing pistols by being the most accurate and reliable.  The M1911 was able to fire 6,000 rounds in one test without jamming, breaking, or misfiring, which greatly impressed the United States Ordnance board.   It became the standard sidearm for American forces until the 1980s and has continued to remain popular among civilian owners.  By the end of the First World War, Colt had produced 425,500 M1911.  Despite expansions to the workforce and factory, the company was unable to keep up with demands for the pistol and they were forced to outsource production to businesses hired by the United States government.  Even then there was a shortage of M1911s and the United States army was forced to order Colt revolvers like the M1909 or M1917 for substitutions, making Colt produce 151,700.

Peter Doyle, "World War I and the Rise of the Colt Pistol." 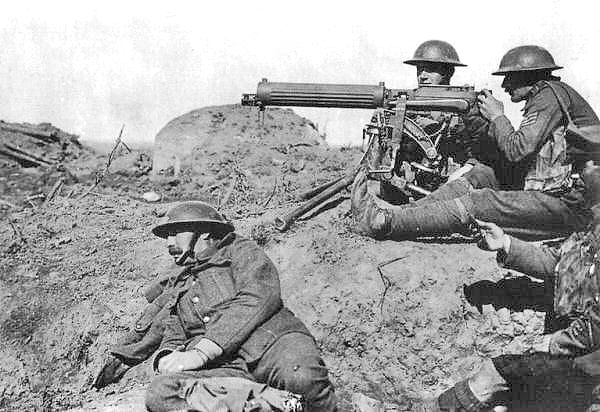 A ammuntion belt for the Vickers Machine Gun.

While the pistol and revolver were Colt staples the company also produced a number of other guns.  One of these was the Vickers Machine Gun; although it was not designed by Colt thousands were produced by the company, which was made to replace the outdated Colt Automatic Gun Model 1895/1914.  The M1895 had been used in the Spanish-American war by US forces, but it had been quite popular internationally as well.  Nicknamed the “potato digger” it was the first machine gun adopted by the United States military and was sold to a number of other countries including France, Great Britain, Canada, and Russia.  When the Great War broke out in 1914, many militaries still used the outdated “potato digger” and large orders for the new Vickers Machine Gun began to roll in as countries attempted to modernize their armies.  The Vickers was considered a significant improvement over the “potato digger,” it had a faster rate of fire and was significantly lighter.   In 1915 the Russians ordered 10,000 Vickers from Colt and the United States ordered 125.  As it became apparent that America might need to join the conflict, the government purchased 4,600 Vickers in 1916 and ordered thousands more into production at a cost of $10 million.  The Vickers was designed to be used in infantry combat, but with the advent of the airplane the gun was mounted on the first combat planes.  With new uses and increased demand for the gun, Colt could not produce enough machine guns, so the company began to expand.

Hartford Courant article on the thousands of Vickers Machine Guns purchased from Colt.

The state of Connecticut was prospering in the neutrality of World War I as factories continued to pump out war products for European nations.  For Colt the huge increase in gun sales led to a twelve-month period of stock growth.  From June 1915 to June 1916 Colt’s stock went up 86% from $443 to $828 per stock.  During this time Colt had $34 million in war orders on hand, meaning that the company was currently producing guns for those orders.  This did not include already completed orders.  This influx of capital to the state meant that companies like Colt needed to expand their workforce to increase production.  In Hartford the factory workforce rose from 21,066 in 1914 to 25,063 in 1916 with 20% of workers being women.  Unemployment around the country dropped to 1.4% which did not account for the expansion of the workforce for women.  Many women would not have been counted as unemployed because they were not seeking employment, nor did unemployment count for the waves of newly-arrived immigrants that were coming from Europe to look for jobs.  During this same time period, the nation’s economy had done a 180 from the recession of 1913.  From December 1914 to August 1918 the United States economy saw forty-four straight months of expansion.  Things were looking bright for industry in Connecticut and the entrance of the United States into World War I in 1917 took the demand for war materials to an unheard of level.

A Browning Model 1917 used by American forces in World War I.

On April 6th, 1917 the United States of America declared war on Germany and entered into the First World War on the side of the Entente.  Joining France and England, the United States quickly realized that they could not produce enough munitions or war supplies by themselves and needed to hire private manufacturers to make up the difference.  It was easier for the U.S to meet their war material needs in 1917 because of the expansion that had already taken place in the industry due to foreign government's production contracts. The U.S government in the short time it was involved in the war spent $4.1 billion dollars on ordnance alone, meaning bullets, casings, shells, etc. Of this $4.1 billion, 91% was spent in the United States which means that only 9% of ordnance production was outsourced to other countries. The newly funded War Department spent over $14.5 billion from April 6th 1917 to June 1st 1919 on the war, and almost all of that money went into the U.S economy.  28.5% of the overall expenses of the War Department went to producing guns, ammo, and shells.  The War Department spent $720,740,000 on ammunition, such as bullets for the new Browning Model 1917.  When tested in Washington D.C the machine gun was able to fire 60,000 rounds at 600 rounds a minute with no jams or malfunctions.  The gun was adopted by the United States army after this impressive trial and Colt opened a new factory in Meriden to fulfill the war order of 10,000 Browning M1917s.  Despite the addition of this new factory Colt was unable to meet the full demand for machine guns by the US government and other gun manufacturers like Remington in Bridgeport were also given war orders. 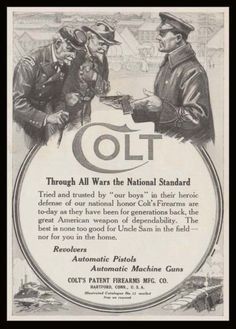 An advertisement for Colt Manufaturing Company.

In the final year of the Great War, factory production was at its peak in Connecticut.  All production at the Colt Manufacturing Company was for the war, whether it was producing .45-caliber Model 1911 pistols, Colt Vickers Model 1915 machine guns, or Browning Model 1917 machine guns.  The workforce for Colt had reached 6,000 men and women.  Never before had Colt been so prosperous and successful, and this was true for most industry in Connecticut.  The First World War had created an incredible amount of wealth through war production and Colt was just one of the most recognizable companies that benefited from it.  The company continues to produce pistols and many other types of weapons today for both the public and the military.  The money received from World War I would allow Colt to survive through the Great Depression and yet again prosper during World War II as they produced the successor to the M1911, the M1911A1 and continued to make the Browning M1917 machine gun.  During World War II, manufacturing levels for the company would reach even higher levels than in World War I and the workforce would expand to new heights.  None of this would have been possible for the company without the war orders during the First World War that allowed for Colt’s industrial expansion.