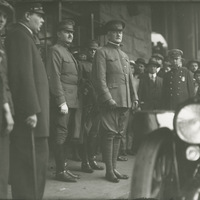 General Edwards in Hartford during World War I.

The state of Connecticut was an essential industrial center for World War I.  Connecticut produced 54% of all ammunition for the United States during the war, but that was only one of the many ways that the state contributed.  In the southern part of the state the Naugatuck valley was nicknamed the Brass valley for the expansive brass industries there.  Companies like Scovill, Chase, and American Brass produced shells, fuses, and many other brass war products for the United States, Great Britain, France, and Russia.  In Naugatuck, there was a thriving rubber industry with companies like Goodyear and United States Rubber.  These companies manufactured boots and tires for the war effort as early as 1914, and in December of that year U.S Rubber received a war contracts from the British and French totaling $1.5 million for army boots.  This same company also produced chemicals like sulfuric acid for the war.  The city of Hartford had numerous industries such as Colt that produced pistols, revolvers, and machine guns.  Also in Hartford was Pratt & Whitney, whose 3,400 employees were devoted completely to war manufacturing.  In Bridgeport there was another gun manufacturer, Remington, that produced rifles.  Yet production was not the only way Connecticut contributed to World War I.  The state sent 66,000 troops to the armed forces including Major General J. Rau of Hartford.  Even civilians contributed however they could and organizations in Connecticut, such as the Red Cross held rallies and donations to soldiers and refugees of the war.  Each town held a multitude of Liberty Loans that helped fund the war and cities like New Britain raised $2.4 million.  The Great War had an enormous impact on Connecticut and Connecticut had an enormous impact on the war.