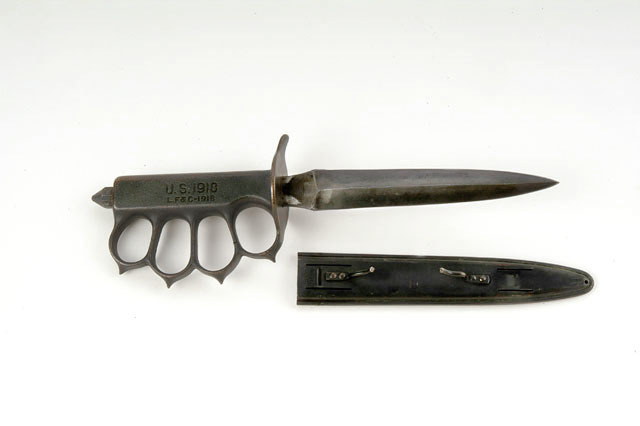 Mark 1 Trench Knife manufactured by Landers, Frary & Clark in 1918. Different from the triangle blade used in the 1917 model, it also has a "skull crush" pommel.

The industrial expansion during World War 1 has too often been ignored.  The first real industrial war had lasting effects on the United States and the state of Connecticut.  Already known for its industry, Connecticut’s manufacturing reached new heights as billions of dollars in war orders poured in.  Starting as early as 1914, governments began to send massive orders for guns, knives, bullets, and many other war materials to Connecticut.  Companies like Colt were able to rapidly expand their factories and workforce in an attempt to increase profits.   They were not the only ones as companies like Landers, Frary & Clark transitioned to war time production; they too were able to expand their factories, workforce, and profits.  This expansion also led to an increase in women working in factories.  The Great War more than doubled the number of women in manufacturing jobs in Connecticut due to the thousands of men leaving to fight in Europe and the massive production orders in the factories.  The new freedoms and opportunities given to women during the war allowed them to increase their economic and political influence.  It was no coincidence that two years after the end of World War I the nineteenth amendment was passed which gave women the right to vote.  The First World War changed the way industry was run in America through an expansion in production and workforce diversity.

← Women in the Factories
Bibliography →
Conclusion